As Spring rolled in this year the Jeannette Neill Dance Studio of Boston celebrated their 35th anniversary, and I was excited for the opportunity to work with the creative team for its annual Spring Repertory Concert.  As an intern at Light Positive, I was given the chance to participate in the production and was happy to accept.

I have been involved in quite a few theatrical productions, but this one will always stand out in my mind as one of the more streamlined and well-practiced productions I have ever seen.  The whole process was managed to the minute.  Choreographers with such diversity of visions worked with the lighting team to create stunning environments on the stage, and it all came together with dizzying speed.

This production has been organized to such a science over the years that the majority of the actual design process was completed before I even saw the performance space for the first time.  I was given charge of the design of one of the 19 pieces.  One of the expectations of this production process was that the design be complete, programmed and in its final editing stages by the time we reached the blocking rehearsal.  Having spoken with the choreographer and seen a single in-process run-through of the dance I had to pull from my own experience as a designer and put together a cohesive design completely blind.  I was thoroughly intimidated by this task, being accustomed to making design decisions based on light that I can see, not just numbers on a piece of paper.  But with a little advice and a lot of nail biting I was able to put together a design to properly display the talents and hard work of the performers. 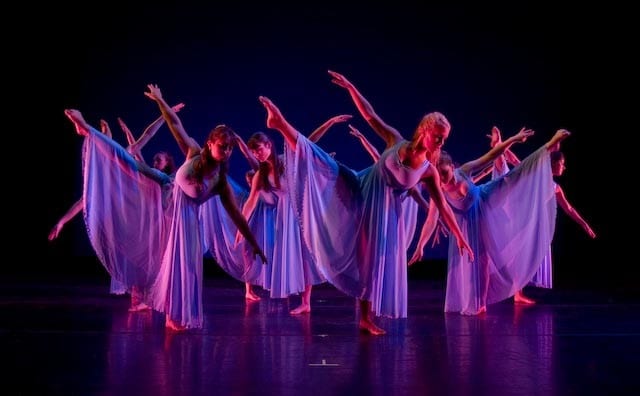 It was truly magical seeing it all come together on stage.  In just a few hours all the numbers and lists that had been swimming in front of my eyes for the past weeks were transformed into jungles, rock arenas and dozens of beautiful new environments that enhanced and blended with the music and the carefully orchestrated movements of the dancers.  It was a beautiful show and I am so happy to have played a part, however small, in the accomplishments of this fantastic group of people.